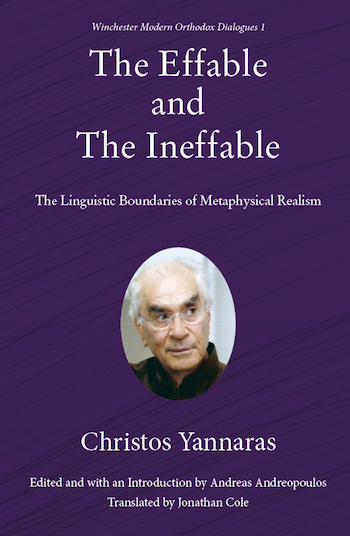 The Effable and the Ineffable

The Linguistic Boundaries of Metaphysical Realism

‘What is the criterion of truth?’, asks Christos Yannaras in The Effable and The Ineffable: The Linguistic Boundaries of Metaphysical Realism. Christos Yannaras is a Greek philosopher, Eastern Orthodox theologian and author of more than fifty books which have been translated into many languages. He is a professor emeritus of philosophy at the Panteion University of Social and Political Sciences, Athens.

Of The Effable and The Ineffable, Archbishop Rowan Williams says: ‘Christos Yannaras is one of the most original and revolutionary thinkers of modern Europe, and in this arresting, demanding book he sets out his vision of how a post-truth society might rediscover the reality of shared meaning and the hope of authentic life. Bringing the Greek Fathers into dialogue with the foremost thinkers of modernity, he gives us a comprehensive picture of what “logos” really means and why it matters.’ Rowan Williams

These are words or phrases in the text that have been automatically identified by the Named Entity Recognition and Disambiguation service, which provides Wikipedia (

) links for these entities.

How to cite this book

This is an Open Access book distributed under the terms of the Creative Commons Attribution 4.0 license (unless stated otherwise), which permits unrestricted use, distribution and reproduction in any medium, provided the original work is properly cited. Copyright is retained by the author(s).

This book has been peer reviewed. See our Peer Review Policies for more information.